Fall cocktails don’t get much easier than this make-ahead Apple Cider Sangria recipe. Every sip is filled with the fresh flavors of fall like apple, cinnamon and ginger.

If there was such a thing as autumn in a glass, it would be this Apple Cider Sangria. It’s filled with comforting fall flavors like fresh apple cider, spicy ginger liqueur, zesty cinnamon sticks and juicy pears.

Double the recipe to festively toast Thanksgiving with friends and family. Or scale it down for those cool October Netflix nights in your favorite cozy pants (fire in the fireplace is optional but totally recommended).

Sangria originated in Spain and Portugal. Wine was combined with fruits, other spirits or liqueurs and juice to make a delicious, make-ahead batch cocktail.

Most often you’ll see recipes for red or white sangria and even rosé sangria. Usually these drinks are red, white or pink in color, depending on the wine used, and they are most often seen in the warm summer months. But this apple cider version reflects the all the colors and flavors of mild fall days and cool fall nights.

You’ll find all the usual suspects in this sangria ingredient list:

The beauty of sangria is that it must be made ahead of time. The fruit needs time to chill out with the wine, liqueur and juices for maximum flavor.

What type of white wine do you use for this recipe?


A drier white wine is ideal for this sangria. I used a Californian Sauvignon Blanc, but if you’re unsure, just ask for suggestions at your favorite liquor store.

Can I make a non-alcoholic version of this sangria?


Absolutely! Omit the wine and liqueur and add additional cider, ginger ale and a bit of non-alcoholic ginger syrup if you can find it. You may also want to include some club soda to cut the sweetness of the extra cider.

Can I use apple juice instead of apple cider?


Of course! Cider is basically pulverized apples that have been pressed into liquid form where juice is finely filtered to remove any solids. This filtration also gives the juice its clear look. You might might notice a milder taste if you use apple juice in this drink as cider generally has a stronger, more robust flavor.

This cider sangria would be right at home whenever the leaves start to turn colors. Add it to your weekend football watching menu along with this crazy popular Green Olive Dip and a batch of easy slow cooker meatballs.

Relishing a few more backyard bonfires before the snow starts to fly? Savor those end of season sunsets with an easy meat and cheese tray or this Mediterranean version of a seven layer dip.

Or double down on apple season and pair your glass of sangria with one (or two) of these irresistible Apple Crisp Bars.

I'm a HUGE fan of anything ginger, so this 3-ingredient Whiskey Ginger cocktail checks all the boxes for me - tasty, easy and uber refreshing.

Love bourbon and apple cider together? A hint of fresh thyme gives these bourbon Apple Cider Drinks a unique and delicious twist.

It’s hard to say no to chocolate, especially when it’s mixed with coffee like in this Kahlúa Chocolate Martini.

Any vodka fans out there? It’s always the right time to celebrate the gorgeous ruby color of a Vodka Gimlet with cranberries.

These Grapefruit Moscow Mules are a tasty balance of sweet and tart - perfect for the ups and downs of fall weather.

Looking for something different? Check the archive for all of our drink recipes including the best drinks to make with liqueurs. 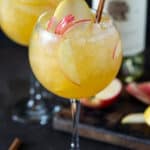