This refreshing, 3-ingredient Whiskey Ginger Cocktail is one of the easiest & best whiskey drinks to make at home.

This 3-ingredient cocktail goes by a slew of names, but I think we can all agree that the combination of whiskey, ginger ale and fresh lime juice makes this easy Whiskey Ginger drink one refreshing libation!

Just because an ingredient list is simple doesn’t mean it can’t be delicious! There are only three ingredients in this easy drink:

It’s confusing, I get it. These two mixers look nearly identical so let’s set the record straight.

Ginger beer: Back when ginger beer was invented in 1700s England, it was an alcoholic beverage. Fast forward to today and even though it has “beer” in its name, most ginger beer you buy at the store doesn’t actually contain alcohol.

Ginger beer can be clear or cloudy depending on the brand you buy. The strong, spicy flavor of ginger beer comes from a brief fermentation with yeast before sweetener, ginger flavoring and a bit of carbonation are added. Ever had a Moscow Mule? Ginger beer is a key ingredient to its unique flavor.

Ginger ale: Likewise, there is no alcoholic “ale” in ginger ale. It’s basically soda (or pop – depending on where you live) – a sweetened carbonated beverage with ginger flavoring. Consider ginger ale a tamer version of ginger beer with a more delicate flavor, a lighter color and more carbonation.

If you love ginger beer, you can definitely use it in this recipe. Ginger beer will give you a spicier drink while ginger ale gives a sweeter, smoother flavor. I personally prefer using ginger ale in my Whiskey Ginger drinks.

Can I use bourbon instead of whiskey?

You might have heard that all bourbon is whiskey but not all whiskey is bourbon. That makes the difference as clear as mud, right?

I couldn’t agree more. If you really want to do a deep dive into the nuances between bourbon and whiskey, this article by Chowhound sums it up pretty well.

In a cocktail like this where the strongest flavor comes from the ginger ale (or ginger beer, if you prefer), you can use either bourbon or whiskey. The small difference between the two isn’t worth buying a whole separate bottle of something else for this mixed drink.

Ever browsed the whiskey aisle and experienced sticker shock at the prices of some bottles? There can be a huge range in cost for whiskey and bourbon.

Fortunately you don’t need a super expensive bottle of whiskey to make this ginger ale cocktail. Grab a reliable, mid-priced bottle and save the higher-end stuff for sipping on the rocks. A big buck bottle is not needed (though you definitely want to buy something you like the taste of).

The only time I’m a stickler for a certain type of spirit is when St. Patrick’s Day rolls around. Ever been in a bar and heard someone order a Jameson and Ginger? It was probably March 17th. Since everyone is a little bit Irish on that holiday, Irish whiskey is a must in this Whiskey Ginger on St. Paddy’s Day.

I’m not a huge whiskey fan – will I like this whiskey drink?

Not feeling the whiskey love? I know whiskey can be a bit polarizing. Either you love it or can’t stomach it.

I think this ginger ale drink is a happy medium for those non-whiskey lovers out there. The bubbly ginger ale mellows the whiskey and keeps the cocktail’s flavor light and bright. Plus the lime juice gives each sip just a nip of freshness.

How to make a Whiskey Ginger

Some cocktails are sticklers for proportions. For example, I wouldn’t just toss the ingredients for a Perfect Manhattan into a glass and hope for the best.

But this whiskey mixed drink isn’t a fussy cocktail at all:

The whiskey amount I’ve listed in the recipe below is merely a starting point. Feel free to adjust to your own tastes. Some like their drinks a bit stronger and will go heavier on the whiskey (ahem, my husband) and others a bit lighter on the liquor (me, on a hot summer day). You do you!

Set up a DIY drink station

A drink station is the easiest way to make sure you’re not tending bar all night at your party. This Whiskey Ginger is a simple ginger ale cocktail that is always a hit.

Place the whiskey, ginger ale and lime wedges on a table along with glasses and ice. Guests can add as much or as little whiskey to their cocktails as they like. Cheers!

Are you more of a vodka fan? We have loads of easy vodka drinks, including one of our favorites – this vodka soda made with a splash of elderflower liqueur!

And don’t forget the snacks! Every party needs easy appetizer recipes. These bacon appetizers disappear EVERY.SINGLE.TIME. Your friends will definitely want the recipe.

The amount of whiskey can vary depending on your personal taste (and size of your glass). Pour in the amount that works for you!

As an Amazon Associate and member of other affiliate programs, I earn from qualifying purchases.

Just three ingredients – spicy ginger ale, hearty whiskey and a squeeze of fresh lime juice – make this Whiskey Ginger one of the easiest ginger ale cocktails around! It’s super refreshing, comes together in minutes and is a great cocktail recipe for spur of the moment happy hours or large groups as it can also be served batch style. 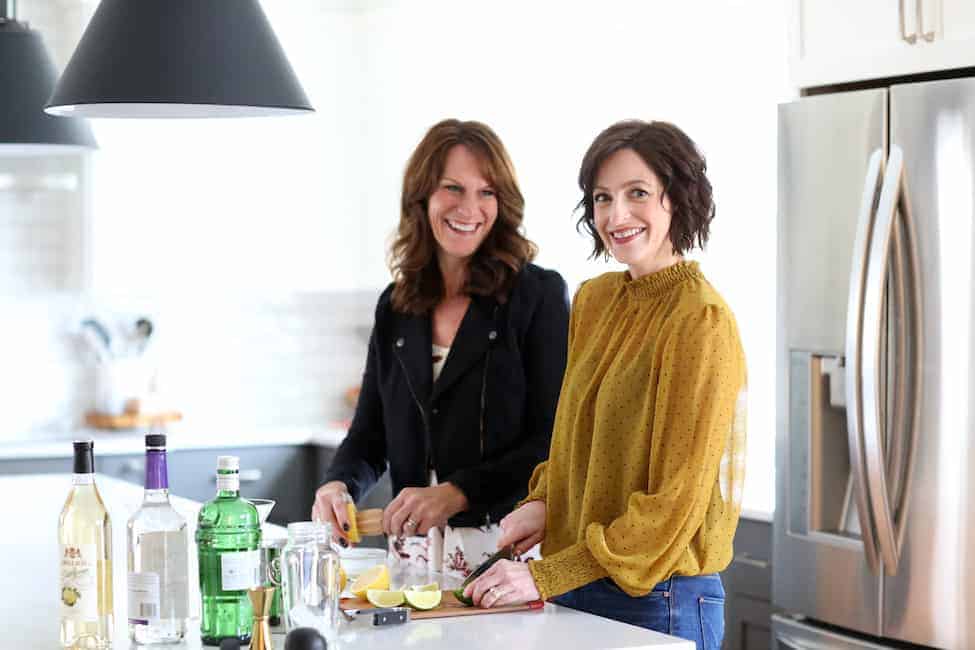 Hi, I’m Anna, a former corporate communications nerd turned food fanatic. Turns out I like cooking for others A LOT more than explaining HR policies to them. C’mon over!
READ OUR STORY

Enter your first name and email and get new recipes sent directly to your inbox! Plus we'll send you five EASY COCKTAIL RECIPES for your next virtual happy hour.
Your information will *never* be shared or sold to a 3rd party.