A vodka gimlet was my dad’s favorite cocktail.

Truth be told, he was definitely more of a beer guy, but when he did have a cocktail, I remember him ordering a vodka gimlet. (Think of a gimlet as a martini’s slightly sweeter cousin.)

Seems fancy, doesn't it?  Well, my dad was definitely NOT fancy, so trust me when I say that looks can be deceiving.

This Cucumber Vodka Gimlet recipe is my version of dad’s go-to cocktail updated with vodka and the flavors of cucumber, basil and fresh lime juice.

What is a gimlet cocktail?

Not to be confused with a similar sounding word (giblet - think turkey and Thanksgiving - definitely not the direction we’re going today), a gimlet is a simple cocktail usually made with gin and something called Rose’s Lime Juice.

Note: Never heard of Rose’s Lime Juice? It’s a sweetened, preserved lime juice that you will often find next to the grenadine in the liquor store. It has an almost electric green color. You can’t miss it - literally.

History mentions that gimlet cocktails originated with British sailors in the 19th century. The ship doctor encouraged his shipmates to add this preserved lime juice to their gin because it was thought to prevent scurvy.

This “medicine” became more socially popular in the 1950’s after a fiction author named Raymond Chandler made it the drink of choice for the detective in his novels.

That must have been where my dad picked it up. Raymond Chandler made gimlets "en vogue" in the same way that James Bond helped martinis skyrocket in popularity.

No offense to traditional gimlet lovers, but I'm not a fan of Rose's Lime Juice. So this Cucumber Basil Vodka Gimlet swaps vodka for the gin and incorporates fresh ingredients:

If you've ever made a mojito, then you're well on your way to making this vodka cocktail because both use a technique called muddling.

Never muddled before? Think of it like a mortar and pestle where you mash the ingredients together to release their flavors.

Follow these simple steps to make your own vodka gimlet:

Not a vodka fan? Then feel free to use gin instead. The flavor will be closer to a traditional gimlet and just as delicious as a vodka version.

The recipe can be easily multiplied to make enough for a crowd. Plus it keeps well in the fridge if made in advance - a bonus when entertaining.

Simply set out a pitcher filled with the cocktail along with glasses and drink garnishes like extra cucumber and basil and let guests serve themselves.

I like to keep a long-handled stirring spoon in the pitcher so guests can quickly re-stir the cocktail before pouring.

Cool as a cucumber is definitely a fitting description for this Cucumber Vodka Gimlet recipe. It’s one I’ll be making on repeat to beat the heat all summer long.

Thanks for the inspiration, Dad.

Or check out all of our other vodka cocktails HERE! 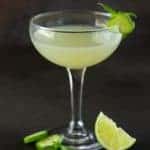 Straight up or on the rocks, you can’t go wrong with this refreshing Cucumber Vodka Gimlet recipe. This fresh flavors in this vodka cocktail make it the perfect thirst-quencher for hot summer days!