In our house, if someone is craving donuts, we usually have to make our own donuts at home because with my daughter's severe peanut allergy, grabbing donuts at the local bakery like most people doesn't happen for us. The chance for cross-contamination of ingredients is too great.

I've had a mini-donut pan in my cupboard for years. I bought it with the intention of making my own baked donuts for my daughter. I figured they would be healthier than those that are fried and obviously eliminate any chance of a stray peanut product sneaking into them. But after several attempts, I gave up searching for baked donut recipes that didn't turn out as hard as rocks.

This recipe for Pumpkin Spice Mini-Donuts from Blue-Eyed Bakers caught my eye on Pinterest quite a while ago, and I'm so glad I broke out the mini-donut pan for it. Ah-mazing.

The texture is lighter and fluffier than your typical cake donut. It's more like a muffin, which I think is ideal for baked donuts. The pumpkin keeps the donuts tender and moist, while the fall-themed spices (cinnamon, nutmeg, allspice, and cloves) are a perfect match for the season. But wait, we're not done yet. The swooning begins once you coat them in butter and dust them with cinnamon-sugar. That really puts them over the top.

Making your own donuts isn't nearly as hard as it sounds, especially when you're making baked donuts that just get thrown in the oven, and don't involve any complicated frying.

Start by preheating the oven, then grease the mini-donut pan.  Next, you'll whisk together the flour, baking powder, salt, cinnamon, nutmeg, allspice and cloves in a small bowl. Then, in a large bowl combine oil, brown sugar, egg, vanilla extract, pumpkin, and milk. Slowly add the flour mixture to the wet ingredients and stir until just combined. (Don't overwork the batter. No one likes tough donuts.)

Once the batter is prepped, pour the batter into a large Ziploc bag and snip a small corner off one end. Squeeze batter into mini-donut pan forms, working in stages if necessary. Bake until the donuts gently spring back when you touch them. Once ready, pop them out onto a wire rack to cool.

Can I Make Homemade Donuts Without A Donut Pan?

No donut pan? No problem! Whip out your regular old muffin pan, and grab some tin foil. With these two items, you can make some make ship donut pans in a flash.

Just place a small ball of foil in the center of the muffin tin, and pipe your pumpkin donut batter around it. Make sure you spray the foil, or the donuts will stick to it.

Traditionally baked donuts are a little healthier than fried donuts. The baked version has a lot less oil and fat content since there is no process of deep-frying.

This recipe does loose a little of that "healthier" status though as it is dipped in butter and coated in cinnamon and sugar, but life is too far too short to waste your calories on mediocre donuts.

How Long Do Baked Donuts Last?

Donuts are always best eaten fresh, and slightly warm. Honestly, there are few things that are better than a freshly baked donut that's still warm. If you cant eat them right away no worries, you still have options.

If you don't plan to eat all the donuts right away, place the uncoated donuts in an airtight container until ready to use. Then proceed with the butter/sugar coating when you are ready to serve them.

The donuts will last in an airtight container, uncoated, for about 4-5. Any longer than that and you will start to run the risk of them molding, or getting tough.

There is no limit on when you can enjoy a good pumpkin baked donuts recipe! Have one with your morning coffee, as your after-dinner snack, or any time in between.

I made these as an after-school treat for my kids last week. Judging by their reactions, you'd think they just won the lottery. I have to agree; I felt rich with love for these bad boys, too.

Don't let the pumpkin in this recipe make you think this is only a fall recipe wither. Most grocery stores sell pumpkin year-round, so feel free to whip up a batch even in the dead of summer! No one here will judge you. 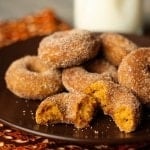 If you don't plan to eat all the donuts right away, place the uncoated donuts in an airtight container until ready to use. Then proceed with the butter/sugar coating when you are ready to serve them.

Keyword pumpkin spice mini donuts
Did you make this recipe?Tag us on Instagram or leave a comment!