Put a twist on your chocolate craving with these Mexican Chocolate Brownies with Cinnamon Buttercream Frosting!

Fudgy, rich chocolate with a kick. That totally describes these Mexican Chocolate Brownies with Cinnamon Buttercream Frosting. Spicy cayenne and fragrant cinnamon give these brownies a south of the border twist that is truly memorable.

The brownie base is built off my favorite cocoa brownies from Smitten Kitchen. Rich, fudgy and sooooo good. Adding a generous tablespoon of cinnamon and a bit of heat from the ground red pepper ensure these are no ordinary brownies though. The spice is subtle but complements the chocolate brownie beautifully.

The first time I made these brownies, I opted for ½ teaspoon of ground red pepper. There was a somewhat noticeable zing that lingered at the end of each bite, so my kids loudly declared that these brownies needed something to tame the “heat” (and when I say heat, I mean Minnesota-kids-who-are-averse-to-nearly-any-spiciness-type-of-heat). I was happy to oblige with this rich cinnamon buttercream frosting. This liberal layer of buttery, cinnamony sweetness was the perfect equalizer for those fearful (or unsure) about spice in their desserts.

You can certainly enjoy these treats sans frosting, but if you’re eating already eating brownies, why not pile on the decadence? 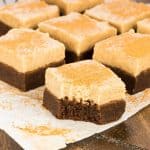 To make the brownies:

To make the frosting:

You may have frosting left over depending on how thick you like your frosting. Freeze any extra for your next batch of brownies

Keyword brownies, buttercream frosting, chocolate desserts, cinnamon, mexican chocolate brownies
Did you make this recipe?Tag us on Instagram or leave a comment!