Fall flavors abound in this appetizer recipe for Crostini with Savory Tomato, Bacon and Apple Jam! 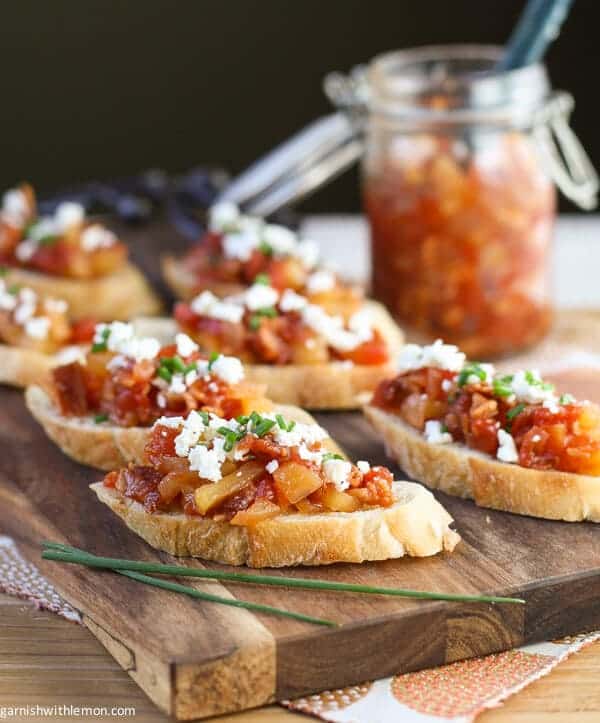 This Crostini with Savory Tomato, Bacon & Apple Jam is one of those recipes that I tore out of a magazine several years ago and always vowed to make one day. (I’d wager that you probably have a similar stack of “must try someday” recipes lying around your house, too.) I try to pare down the pile a few times a year before it gets completely out of hand, but this recipe has made the cut every single time I “declutter” my kitchen. I just need to take that as a sign, right? MAKE THE CROSTINI!

So that’s what I did. And now I’m kicking myself for not making it sooner.

These are fabulous fall flavors, folks. The tart apples, smoky bacon, savory onion and juicy tomatoes all mellow out together with some sugar and vinegar to make a tangy topping for toasted crostini. Add a bit of salty feta and a sprinkle of fresh cut chives, and you have an appetizer that is not only pretty to look at but pretty hard to stop eating, too!

There is a running joke in our family about how I rarely make the same thing twice. Mostly because I have a stack of yet untested recipes always at the ready. These Crostini with Savory Tomato, Bacon & Apple Jam? They may have been a long time coming, but they are definitely here to stay.

Tip: Keep this recipe for Crostini with Savory Tomato, Bacon & Apple Jam in mind the next time you’re entertaining as the jam can easily be made in advance and refrigerated until you’re ready to assemble the crostini. I would totally dig the jam on some grilled meat or seafood, too. 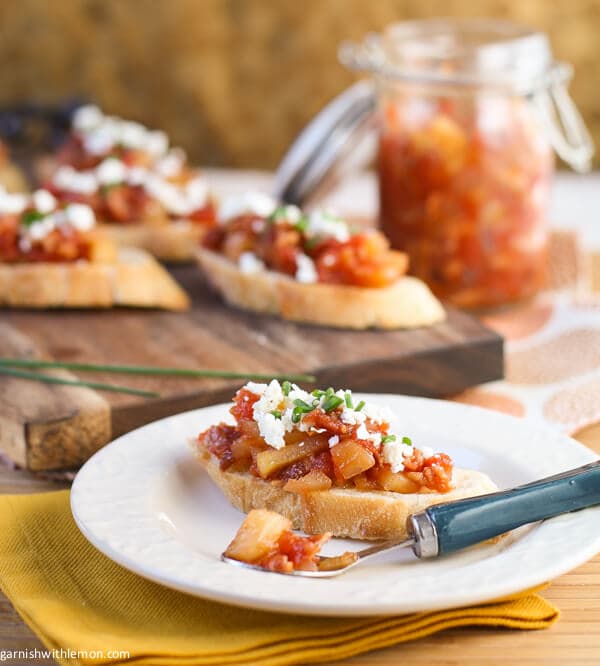 Savory jams are so versatile. Check out a few of our other favorites!

Enter your first name and email and get new recipes sent directly to your inbox! Plus we'll send you 5 CLASSIC COCKTAIL RECIPES. Learn to make bar-worthy drinks at home!
Your information will *never* be shared or sold to a 3rd party.