Can you ever have enough apple recipes this time of year? I can't, and I hope you have room for another one in your kitchen, because this Apple Cinnamon Pull Apart Bread totally deserves your time. Not only does this bread fill your house with the wonderful scents of cinnamon and freshly baked bread, but it's way less work to make than you'd imagine thanks to a secret weapon: frozen bread dough.

I'm horrible at rolling out dough or pastry of any kind. Seriously. We make homemade pizza all the time, and my kids always giggle at the shape of the pizzas they find on their plates. So while the frozen bread dough may be a short cut for you, it's a necessity for me. 🙂

This bread comes together pretty quickly. And since it's meant to look irregular, there is no added stress to get the bread dough slices perfectly (or even remotely!) even. Slice a loaf of frozen bread dough, dip each piece of dough in cinnamon-sugar and butter and stack the bread dough pieces in a loaf pan. Toss some diced apples with brown sugar and a little bit of butter and stuff it all in between the bread pieces. Let the dough rise, pop it in the oven and try to be patient while it cools enough to eat.

When the brown sugar-apple mixture bakes, the sugar melts and caramelizes the bottom of the loaf. You'll see this when you remove the bread from the pan. Now some people will stop there and call the bread perfect. Not me. I couldn't leave well enough alone so I added a vanilla glaze to the top of the loaf. Of course, that step is totally optional…just not for me.

P.S. This Apple Cinnamon Pull Apart Bread is delicious for breakfast but is equally tasty as a mid-afternoon snack. It's probably best eaten the day it's made, but I had no problem eating it again the next day (and the day after that!) 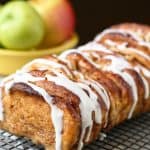